The simplest magnet system is one where a sample insert has a small 6T magnet bolted at the bottom. Such an insert would have an integral variable temperature insert with sample space of 25 mm. These inserts are very effective in performing transport studies on nano size specimens and can be a useful tool to demonstrate the Quantum Hall Effect for educational purposes or for prescreening samples before they are tested at facilities that are not easily accessible.

Bottom loading magnet systems are typically used when a small diameter (e.g., 8 inches or less), top-loading sample insert is to be used and the magnet is relatively large. The magnet is installed from the bottom of the dewar through a series of bolted flanges and installed on the bottom of liquid helium reservoir. This allows the dewar neck diameter to be small, thus minimizing the liquid helium consumption. Bottom loading systems can be used with solenoids, split coils, gradient coils, etc.

Magnets wound from NbTi or Nb3Sn may be conduction-cooled and operate in vacuum without the need of liquid helium (e.g., “cryogen-free”). Cryogen free systems can replace most conventional liquid helium cooled magnet systems if a compact system is required, or if liquid helium is undesirable or unavailable. Current leads constructed with HTS material allow the system to be cooled using either a G-M or Pulse Tube type cryocooler. 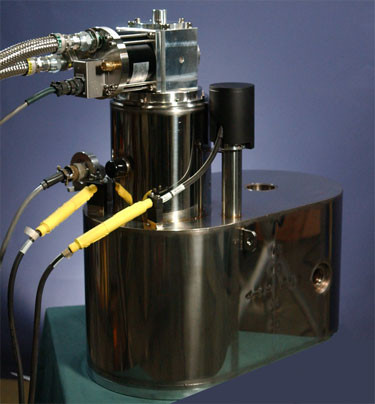 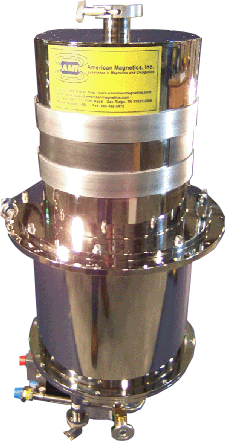 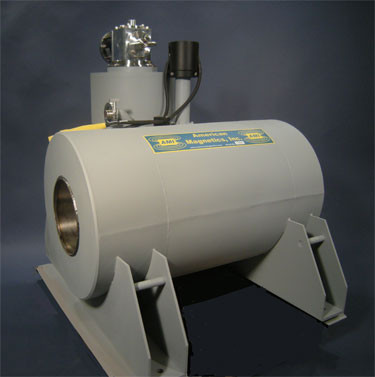 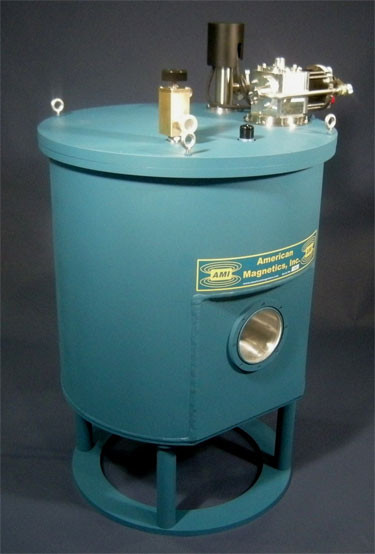 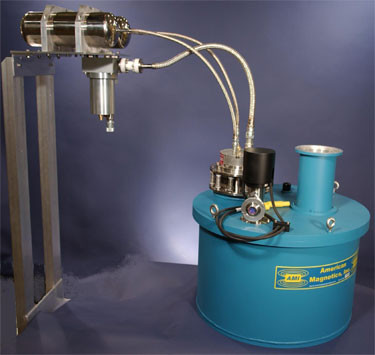 Many solid state physics experiments require the highest possible magnetic fields for high H/T or materials characterization measurements, particularly of superconductors. Using a combination of Nb3Sn and NbTi, fields up to 16 Tesla are now possible. A lambda point refrigerator can reduce the temperature to 2.2 K, while allowing refilling at atmospheric pressure. AMI manufactures both high field solenoid and split coil systems. The system shown here is integrated with a VTI and lambda plate refrigerator unit.

MAxes TM systems provide variable magnetic field on the three principal axes and are particularly useful for orientation studies on a variety of samples. The system is comprised of a 2 or 3-axis superconducting magnet, low helium consumption current leads, magnet dewar and other associated electronics. Typical specifications include magnetic fields up to 9T for the principal vertical axis, 2.0/3.0 inch vertical clear bore and up to 3T rotating vector using any combination of x, y and z-axis magnets.

It is possible to use the magnet system with existing sample inserts or AMI can provide a variable temperature insert which operates from 1.5K to 300K. Our users have also used such systems with 3rd party He3 systems and dilution refrigerators.

anisotropic studies on a variety of materials. MAxes TM systems have also

been very useful in advancing research in the areas of spin based physics.

control the magnetic field vector from a single computer screen (below).

OptiMAxesTM systems provide variable magnetic field on the three principal axes and are particularly useful for orientation studies on a variety of samples for optical experiments. In light of the growing interest in spin-related phenomena and new generation devices for processing information, there is now renewed interest in the science and engineering of magnetic semiconductors. Magneto-optic studies provides an ideal means for studying properties of magnetic semiconductors and other materials where spin related phenomena are of paramount importance.

any combination of x, y and z-axis magnets. It is also supplied with a variable

temperature insert which operates from 1.5K to 300K.

A typical magneto-optical system offers optical access in two planes with magnetic field in either horizontal or vertical field configuration. A standard system is available with a low temperature insert operable over 1.5K to 325K and magnetic fields up to 10T. These systems are available with a wide range of window materials. Actively shielded and cryogen free versions are being routinely offered for all applications.

Room temperature bore systems give the user access to the magnetic field in an ambient condition environment. Such systems are useful when beams, temperature sensitive samples, vacuum chambers or furnaces must be placed in the bore. Systems containing smaller sized solenoids (to left) may have a rectangular tail section, horizontally mounted magnet bore and a larger liquid helium reservoir above the magnet. Systems with larger magnets and horizontal fields will often be provided like the units shown (below). Custom systems include use of magnets that are designed

Magnets with radial access ports are manufactured for a cold bore or for warm bore applications. The radial ports allow access perpendicular to the magnetic field. The cold bore magnet systems are ideally suited for use in horizontal field configuration, and are extremely useful for performing angular dependent studies on samples in presence of magnetic field. Our standard magnet systems are offered with a VTI that could be operated over 1.5K to 325K. Custom systems include use of magnets that are designed for minimizing stray fields (i.e., active- shielding) 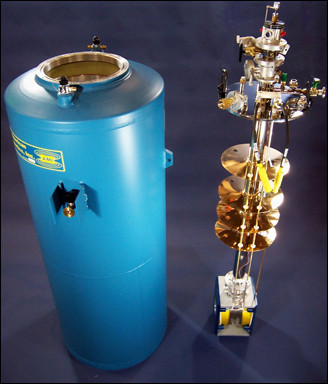 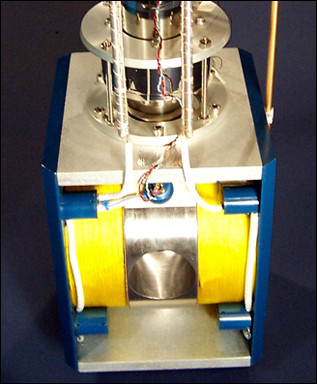 This is the most widely used configuration, and typically these systems have solenoids with bore diameters between 1 inch and 5 inches and homogeneities in the range of 1.0% to 0.01% over a 1 cm diameter spherical volume (DSV). Fields up to 9 Tesla are generated with NbTi solenoids and higher field solenoids > 9 Tesla generally require Nb3Sn conductor when operated at the normal boiling temperature of liquid helium (4.2K). Our standard magnet systems are offered with a VTI that could be operated over 1.5K to 325K. These could also be used with 3rd party He3 or dilution fridges. Custom systems include use of magnets that are designed for minimizing stray fields (i.e., active- shielding) or have reduced field compensation stages for use with dilution fridges. Cryogen free versions for most of the systems are also available. 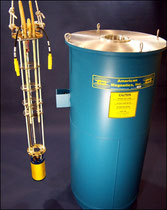 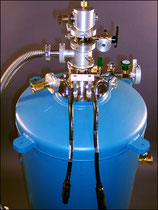